Chart of the Week: Is Job Creation Holding Back Rate Hike?

Chart of the Week 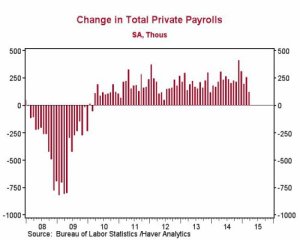 Last Friday, the nonfarm payrolls numbers, a closely watched gauge regarding the employment market, for the month of March were announced at a disappointing 126,000 new jobs, a far cry from the 245,000 economists estimated. This was, no doubt, a big miss, and is being seen by many as just another indication the Fed will not raise rates this year. However, when put in context, these claims seem overblown. With the unusually cold weather, west coast port strikes, and steep drop in energy prices, the employment market was bound to take a hit. Despite these issues and the poor March number, payrolls are up 261,000 on average the past 6 months, the exact same as the previous 6 months. This number is volatile in nature, having a standard deviation of around 70,000, meaning that 1 in 20 reports will be around 140,000 off the mark. Basically, this latest report is something to look out for, but for now should not be seen as anything more than normal volatility.

This entry was posted in Uncategorized. Bookmark the permalink.