U.S. stocks recovered lost ground last week as volatility returned in the positive direction—with stocks experiencing their strongest-returning week in five years. Every sector ended in the positive, with information technology and industrials gaining the most ground, while telecom and energy came in last place. The recovery appeared to be led by strong earnings and fundamentals, fewer concerns over inflation strengthening, and other news, which included details about the administration’s infrastructure plan, such as over a trillion dollars of new investment and a streamlined regulatory environment. Speaking of earnings, 80% of firms in the S&P have now reported, with the index showing a Q4 year-over-year gain of +15%. Although energy has led the way with strong year-over-year comparatives, S&P ex-energy is also up a solid +13%. Revenue gains are also up in the +10% range. Interestingly, dividend payouts are also rising.

Foreign stock returns in Europe, U.K. and Japan were also positive for the week, to a lesser degree—however, a weaker dollar pushed returns up to a level equivalent to those in the U.S. As in the previous few weeks, the primary driver of non-U.S. equity returns appeared to be market sentiment in the U.S., although fundamentals and earnings growth abroad continues to show improvement. Japanese GDP grew for the 8th consecutive quarter, albeit only at an annualized rate of +0.5%, with imports rather than exports leading the way—a shift from prior trends. In emerging markets, stronger global growth and, to some degree, commodity pricing has again boosted Brazil, China and Russia, while South Africa earned double digit returns as the problematic long-standing president finally stepped down.

Real estate gained slightly, to a lesser degree than broader equity markets. In the U.S., mortgage and timber REITs fared best, with gains more similar to other stocks, while retail/malls showed weaker gains in keeping with weaker retail sales results. Europe and Asia fared better, due to the tailwind of a weaker dollar.

Commodity indexes gained ground as the dollar fell. All segments ended the week with positive returns, led by industrial metals and energy. Crude oil recovered over the week by +4% to end at $61.55, despite reports of increased production upcoming and even fears of a glut. 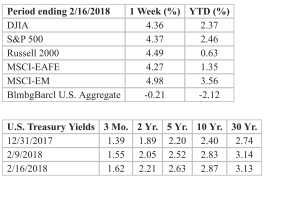 The information above has been obtained from sources considered reliable, but no representation is made as to its completeness, accuracy or timeliness. All information and opinions expressed are subject to change without notice. Information provided in this report is not intended to be, and should not be construed as, investment, legal or tax advice; and does not constitute an offer, or a solicitation of any offer, to buy or sell any security, investment or other product.

This entry was posted in Uncategorized. Bookmark the permalink.