Chart of the Week: Fed Not Impatient

Chart of the Week 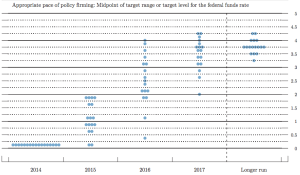 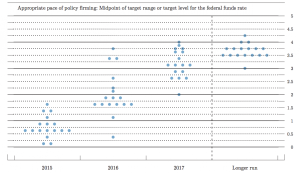 This week’s charts are Dot Plots, a visual depiction of the expectations FOMC meeting participants hold of where the federal funds rate should be in different points in the future. The dropping of the term ‘patient’ received most of the publicity in release of the FOMC Meeting minutes yesterday, giving the false sense of a hawkish theme. The actual statements from the Fed conflictingly painted a dovish tone. There were clear concerns with the rising dollar causing headwinds for growth, and the Fed downgraded their expected economic output from 2.6-3.0 percent to 2.3-2.7 percent accordingly. Incidentally, participants of the meeting lowered their expectations of where the federal funds rate should be by the end of 2015. The median expectation dot is at 0.625 percent, down from 1.125 percent in the December statement, suggesting that rate rises are more likely to be announced later (in the September meeting) rather than sooner (June meeting).