(+) Retail sales came in quite a bit better than expected for April, with a slight gain of +0.1% for the month relative to a forecasted decline of -0.3%.  In addition, February and March sales were revised upward a few tenths of a percent.  However, the ‘core’ sales number gained a better +0.5% compared to a forecasted +0.3% increase—the headline figure was negatively affected by the weaker net impact of a -4.7% drop in gasoline station sales (which are notoriously volatile and unsurprisingly based on gasoline pricing) and +1% gains in auto and building materials.  In the core, where gasoline wasn’t included, everything else did relatively well:  apparel, ‘general’ merchandise, online sales and electronics all gained about a percent or more for the month.  All-in-all, a decent report that shows some strength to offset a few other flat to disappointing indicators.

(-/0) Business inventories for combined manufacturing, wholesale and retail for March rose less than anticipated, with an unchanged result versus the expected +0.3% gain (a Feb. revision caused that month’s result to end up unchanged as well).  Retail inventories declined -0.5% for the month, in both the auto and non-auto groups.  The inventories-to-sales ratio is well under control, so this isn’t really an outlier of any kind.

(+) Import prices fell -0.5% in April, which was largely in line with expectations, while a revision of March’s original -0.5% drop tightened to -0.2%.  The biggest factor in the drop was a 2% decline in petroleum prices (mostly Brent crude), which usually accounts for most of the month-to-month volatility in this series, but other imported good prices ticked downward slightly as well.  For the past year, imported goods showed a benign +0.3% increase, which is largely consistent with tempered inflation elsewhere.  Notably, Japanese import prices declined over a half-percent in April, in keeping with strong Yen depreciation over recent weeks as discussed in other weekly reviews.

(-) Industrial production fell off a bit in April, with a decline of -0.5% relative to the -0.2% decline expected.  Manufacturing production declines represented the bulk of this, as aggregate hours fell, but utilities output fell also as winter weather normalized somewhat.  In terms of sectors, minerals/mining, apparel, petroleum/coal and autos/parts all fell over a percent and were the hardest hit on the week.  Capacity utilization declined to 77.8%, lagging the consensus estimate of 78.3% due the lower production noted above.  Manufacturing activity in general slowed for April, so this falls right in line with other statistics we’ve noted for last week and previous weeks.

(-) Housing starts declined dramatically by -16.5% for April, and underperformed the expected -6.4% forecast figure.  Single-family starts fell -2%, while multi-family fell -39% (the latter being notoriously more volatile).  These releases are noisy by nature month-to-month, however, and the trend over the trailing 12 months is +13%, while single-family have gained 21%.

(+) Building permits, on the other hand, gained +14.3% in April, several times what consensus called for at +3.8% (and the March declines were lessened by a few percentages points in a revision).  Single-family were up +3%, while multi-family rose +38%.  Essentially a mirror image of the April housing starts figures.

(+) The NAHB homebuilder index for May rose to 44 (a rise of 16 over the past year), which outperformed expectations by a point.  This ended a trend of a few negative months, and was led by builder assessments of present sales, and a bit by future sales expectations and prospective buyer traffic.

(-) The May Empire manufacturing index for the New York Fed area came in at a weaker-than-expected -14, versus a consensus +4.0.  Segments in the index, such as new orders, shipments, employment and workweek length declined a bit in line, as did forward-looking expectations.  At the same time, capital spending expectations rose—an area of strength we’ve seen in several surveys/measures as of late, even in the midst of other pessimism.

(-) The Philadelphia Fed manufacturing index also declined from an April +1.3 reading to -5.2 for May, relative to an expected +2.0 reading.  Shipments, new orders, employment and average workweek data all deteriorated, while six-month ahead expectations for several areas (including capital expenditures, like the Empire survey) improved.

(0) The first of the inflation numbers to be reported last week, the Producer Price Index (PPI) reported a -0.7% decline on a headline level—just a tenth of a percentage point lower than forecast.  The Core PPI, which excludes food and energy, gained just +0.1%, right on target with forecast.  Finished goods rose, while core intermediate goods fell during the month, in keeping with their trend over the past year.  Subdued inflation from this measure continues (more below on this).

(0) The Consumer Price Index (CPI) fell -0.4% for April, which was just a tenth of a percentage point lower than expectations.  The ‘core’ CPI, removing food and energy, rose +0.05%, quite a bit below the forecasted +0.2%, although we’re talking about small numbers overall here.  However, that’s the smallest increase in the core in about three years.  The decline in the headline number was largely the result of a -4%+ drop in energy prices (gasoline mostly), but other factors fell in price as well, including clothing, medical care and transportation.  Shelter costs rose slightly.  This put the year-over-year increase for the headline and core at +1.1% and +1.7%, respectively.

What happened to the inflation fears?  Now they seem to have been replaced by deflation fears, believe or not, in some circles.

We assigned this weekly item a ‘0’ neutral rating, based on the cross-currents at play here.  While we are certainly weary of higher inflation readings (mostly as they translate to the wages/salaries side, although energy price spikes can also be detrimental to economic growth through consumer spending impacts), some inflation is a natural side-effect of economic growth.  By contrast, disinflation or outright deflation, while more rare, can be a sign of fundamental economic stagnation and is much more difficult to pull out of.  Examples are Japan in recent decades and the United States during portions of the 19th century after the civil war (albeit the latter was an era during which we didn’t have a central bank as we know it today, much less the policy tools at our disposal, for better or worse).  It’s not so much the deflating prices that are the problem (we all want things cheaper), but it’s the broader tendency for postponement of economic activity.  Rather than hoard certain goods like we did in the late 1970’s when we knew they could be more expensive the next month, deflation spurs the opposite behavior—postponing consumption since the good might be even cheaper down the road.  This results in a potential downward spiral that Bernanke is fighting by keeping QE on.  This is a dramatic scenario, but this provides a bit of context into the nuances of inflation/deflation fears and why the market watches them so closely.

(+) The Conference Board Leading Economic Index rose +0.6% for April, which reversed the small decline in March.  The biggest factors in the increase were accounted for by housing permits and interest rate spread conditions, while improved labor market conditions also played a role.  However, as the release noted, the consumer outlook on the economy remains somewhat weak and that, along with business confidence, remains a significant wildcard for economic growth in coming months.  Both the coincident index and lagging index, which measure same-time and backward-looking economic factors, respectively, each rose +0.1% for the month.  These results, which are based on a variety of weighted economic data, point to a bit of a slow spot this spring, with possibilities for better growth mid-year and beyond.

(+) The NFIB small business optimism index rallied to 92.1 for April, which bested the forecasted 90.3 number.  The index level is almost back to where it was prior to the big Nov. 2012 drop-off, but does remain low from a historical standpoint.  An improvement in survey respondent forward-looking views of the economy was the primary catalyst, although they remain negative—just less so.  Hiring plans and those expecting sales to rise moved into the positive category, which helped the net result as well.  Capital spending plans tempered lower a bit, but remain solidly positive overall.  Anecdotally, which is no surprise perhaps, tax issues, governmental regulation/bureaucracy and poor sales were listed as the top business challenges, but the results of the survey show that these may be improving.

(+) The preliminary May reading for the University of Michigan Consumer sentiment survey showed a greater-than-expected rise from 76.4 to 83.7, which outperformed the consensus estimate of 77.9, and hit a new six-year high.  In contrast to other anecdotal information from other areas, consumer assessments of current conditions rose dramatically, as did their expectations for the future (although commentary indicated that this sentiment increase was most apparent in the top 1/3 of households, ranked by income).  Inflation expectations for the forward-looking year remained stable at 3.1%, while the 5-10 look-ahead figures dropped a bit to 2.8%—although remain on par with long-term averages.

(+) Speaking of sentiment, investor sentiment as measured by the American Association of Individual Investors comes out each week and offers an interesting glimpse into retail investor behavior.  Since the late 1980’s, investors have felt ‘bullish’ about 39% of the time, while the ‘neutral’ and ‘bearish’ respondents have been numbered just above 30% each on average.  However, these measures change weekly and can hit various extremes, as you might expect.  The bullish and bearish respondents have each hit a maximum of 70-75% and minimum of 6-12% over the last few decades (naturally, the late 1999-2001 tech bubble period was overwhelmingly bullish, while the following bust years as well as 2008-early 2009 were quite bearish).  The measure is quite fickle and past performance-related.  One thing we have noticed is that sentiment in the most recent rally has not truly solidified in a comprehensive or consistent way.  It continues to be very sporadic, and investors continue to appear skittish—which is also consistent with anecdotal reports of general public sentiment of investment markets post-2008.  This lack of excitement has proven to be a contrarian bullish signal of sorts. 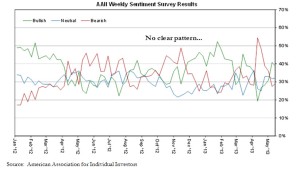 Speaking of sentiment, we were reminded of one least piece that put some of our current economic woes into context.  It’s a quote from Time Magazine:  “The U.S. economy remains almost comatose. The structural faults represent once-in-a-lifetime dislocations that will take years to work out.  Among them include the job drought, the debt hangover, the banking collapse, the real estate depression, the health-care cost explosion and the runaway federal deficit.”  Any guesses on the date?  Although it sounds strikingly modern, it was taken from the Sept. 28, 1992 issue.  Despite the headlines and ongoing pessimism, the economy moves along, and is generally prone to growth more than it isn’t.

This entry was posted in Economic News. Bookmark the permalink.